Good Holy Thursday afternoon where I’m enjoying a vegan cappuccino after having a haircut by Toni! 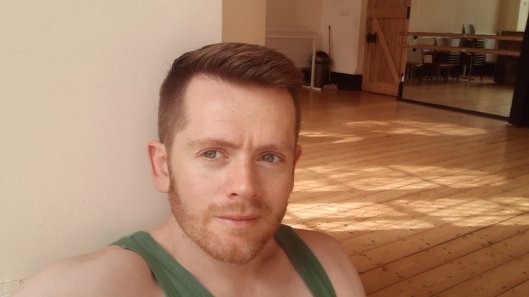 Of course I had no intention of buying a vegan coffee but that’s all they sold where I stopped so I said why not? I got some almond milk and it’s actually quite nice.

With Holy Thursday here and as we remember the first mass, I asked myself a slightly naughty question. What do vegans do for Holy Communion which of course is the body and blood of Jesus disguised so to speak as bread and wine…..Jesus could be sued for discrimination if He were to come back!

Before getting onto Holy Thursday, did you know that yesterday was not only spy Wednesday but was also transgender visibility day. Toni did a wonderful vlog on being transgender, being catholic and being visible.

Toni is still waiting and saving for his ‘top operation’ which will remove his breasts and allow him to look like this!

He is indeed very brave in talking about these topics, especially in the catholic community where there often can be so many misconceptions, misunderstandings and fear.

And doesn’t this tie in nicely with Holy Thursday when Jesus instituted the Eucharist so that over 2000 years on people such as Toni and indeed ourselves can receive Jesus.

To be perfectly honest I’ve never really enjoyed the Easter season since my conversion because at times one feels that rites and rituals and sermons sort of take over and the poor and ordinary people get pushed out.

I’ll never forget the first religious community where I stayed in France and the Easter celebrations! It was like the zoo, utter chaos and everyone stressed and irritable. I often wondered if Jesus wouldn’t have been far happier with something far more low key and prayerful. After all He was born in a stable rather than a 5 star hotel.

That said when the liturgy is well prepared and the people doing it actually know what they are doing, it can be very beautiful. However in my experience this is not the case and often Easter turns into a religious faulty towers comedy where once again Jesus is crucified by pompous music and rituals and the smells and bells that so often make ordinary people feel excluded and intimidated.

At the risk of sounding too negative I had better turn this blog around now and redirect my focus to the real focal point of this season, Jesus.

Easter season is a fantastic time to take some time out from it all, to sit in the church and simply to talk to Jesus and thank Him.

At times we can learn from our animals who are often far better at just being rather than perpetual doing.

So this Easter, try not to let yourself get caught up in the trap of busyness but try to take a step back from the crowd and be like saint Veronica who spotted Jesus and wiped His face.

Consider Jesus not only in the church over the next few days. Consider Him also in the poor, in the needy and in the rejected of our society and allow the Spirit of the life, death and resurrection of Jesus to move you beyond your boundaries to run out and to do as Veronica did for these people. For it is in acting like this that we will truly live the message of Easter and be loving, obedient disciples of Jesus Christ.

Thanks for reading and please pray for us!